Awards, awards awards. The second part of the month January was characterized by awards. The Dutch Glazen Tulp Awards, the TPIE People's Choice Award, IPM Innovations award and the AIPH International Grower of the Year award. Below they are all highlighted, together with some interesting company changes that took place that month.

NL: Winners Glazen Tulp Award
The Ranunculus Pon-Pon Malva, Super Serie Petticoat, Rocky Diamond Blue Heart and the concept of Bloombites won the Glazen Tulp Award 2016. These awards are 'the Oscars of the Dutch ornamental sector'. In this 25th edition of the show, the most distinctive products in the category cut flowers, house- and garden plants and concepts were put in the spotlight.


US (FL): TPIE 2016 People's ChoiceAward winners
Each year on the TPIE's opening day, show attendees are asked to vote for their favorite flowering plant, foliage plant and product from those submitting new plants and new products to the show's exhibitors' showcase. This year, the Nepenthes 'Lady Luck' was voted the Favorite New Flowering Plant, the Aglaonema 'Pink Dalmation' the Favorite New Foliage Plant, the Coffee Arabica, the Favorite New Product and the Calathea 'Bicajoux Gekko' the Most Unusual Plant Specimen.

IPM Innovations 2016: And the winners are...
With a record registration level of 76 plant innovations, the Innovation Showcase, which the Central Horticultural Association (ZVG) initiated as a competition on the occasion of IPM in 2008, has become a permanent fixture. At the IPM Essen 2016, the jury awarded many plants in many categories. But the Hydrangea macrophylla Frisbee Hot Pink and Caipirinha varieties from the Hydrangea Breeders Association won a special prize. This serves to honour the particular breeding work which culminates in a product with exceptional cultivation success. 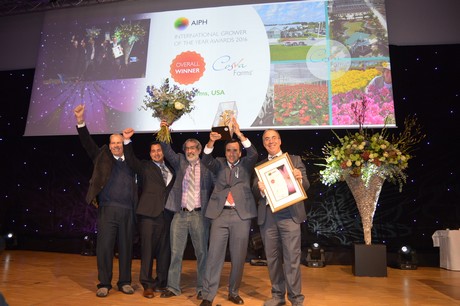 US: Beekenkamp & Danziger sign poinsettia agreement
In January 2016, Danziger and Beekenkamp announced their poinsettia agreement. Danziger expands its portfolio of products to the U.S. market with the addition of Poinsettia cuttings of Beekenkamp’s leading varieties. "We are pleased to meet the demands of our customers through collaboration with a market leader like Beekenkamp,” said Micha Danziger, Co-CEO at Danziger “Dan” Flower Farm.

The Selecta Group with headquarters in Stuttgart, Germany presents a new corporate design at the IPM Essen 2016. The Company announces that in the future all companies within the group will appear on the market under the brand name Selecta one. The company names and legal forms of the group members will be unchanged. A new logo, a new claim and many other positions reflected the reorientation.