While on a business trip in Japan, Hugo Noordhoek Hegt, CEO of horticultural breeder and propagator Dümmen Orange, visited the grave of one of his ancestors in Yokohama. As a descendant of the Dutch Noordhoek Hegt family, Hugo had long cherished the hope to visit the grave of Marinus Noordhoek Hegt (1821-1894) in Japan one day.

Marinus Noordhoek Hegt immigrated to Japan from the Netherlands in the mid-19th century and was a successful merchant in Yokohama. He was the owner of Heft Brewery and one of the pioneers and developers of Japan’s beer brewing industry. Mr. E. Wiegand, a brewer at Spring Valley Brewery – then Japan Brewery, the forerunner of Kirin Brewery – had worked for Marinus Noordhoek Hegt’s company. 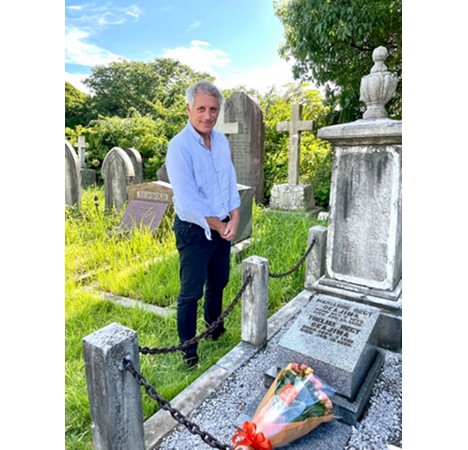 “Marinus Noordhoek Hegt also founded a Western theatre in Yokohama, and he was an influential figure in the Japanese theatre scene,” says Hugo. The theatre was operating in the basement of what is now the Iwasaki Museum in Yokohama and was named the Gaiety Theatre after World War II. Today, the Gaiety Theatre remains a popular destination for entertainment in Yokohama.

With great help from the Iwasaki Museum, Hugo was presented with a chance to visit his ancestor’s grave. “I am inspired by all the historical facts and legends I am hearing about Marinus Noordhoek Hegt,” he says. “I’m very proud of all the things he did to develop Yokohama’s economic and cultural life, which really opened a gate for cross-cultural communication between Japan and the Netherlands.”

Hugo left a bouquet of beautiful roses from Dümmen Orange at Marinus’ grave. “It’s nice to revive the old family ties with Japan,” he says. “Our family already showed commitment to the country more than a century ago, like we’re doing now with Dümmen Orange.” Having a proud legacy in the country already, Dümmen Orange views Japan as an important market, not only because of its CEO’s special relationship with it but also because of the growth opportunities it offers. The company invests accordingly. In March of this year, the Japanese team moved into a brand new office in Shizuoka. By further investing in the company’s infrastructure and capabilities in Japan, Dümmen Orange reaffirms its mission to work closely with growers and value chain partners to inspire consumers and create a better, more beautiful Japan.