Also this month, December was marked by the Christmas holidays! Poinsettias, roses, hypericums, hellebore and many more plants and flowers were in high demand. But besides Christmas, there was more news. Agri-Lake Flowers' new greenhouse ready for planting, for example, was ready to plant their first rose crop, United Selections appointed Schreurs as new representative in Europe, Supertunia Vista Mini Blue Star was awarded Japanese flower of the year, Uhuru Flowers announced its launch of Wabara roses and Ter Laak announced their 5ha Daylight Greenhouse expansion. Below the overview: 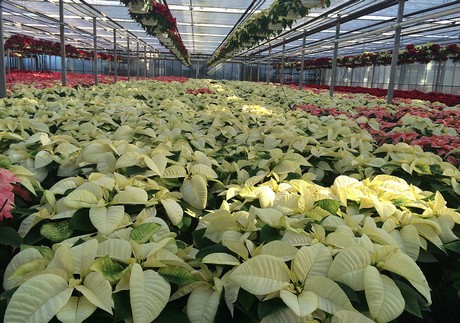 Poinsettias: "People tend to go for bigger pot sizes"
In the beginning of December, New Jersey based Hionis Greenhouses was in the middle of its shipping season for poinsettias. According to the owner, Tim Hionis, the sales were strong and the bigger pot sizes were seeing good demand. However, as the season is not over at that time, he could not state anything yet. 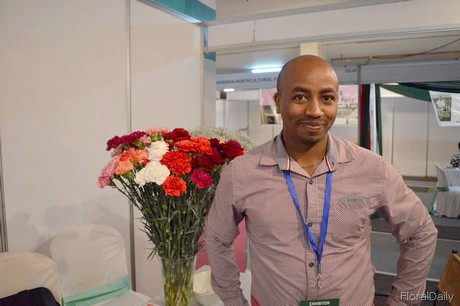 Boost in Kenyan exports adds color to Christmas
Christmas is around the corner, which means an opportunity to increase the flower sales. And this is what Kenyan flower exporter Rosepath Petals is doing. Since the beginning of December week, their Christmas shipments were running and the volumes and prices seemed to be higher than last year. 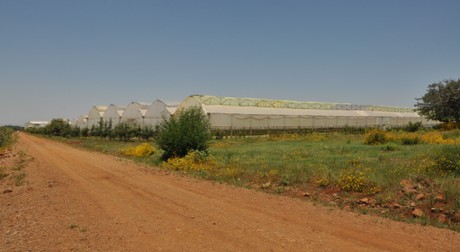 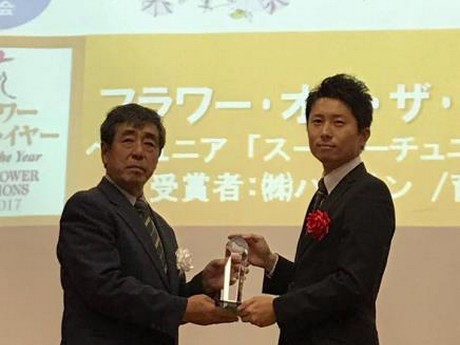 Supertunia Vista Mini Blue Star is Japanese flower of the year
Supertunia Vista Mini Blue Star won "Japan Flower of the Year 2016-2017" and "Good Performance Prize" as garden plant at the Japan Flower Selection (JFS). The award ceremony was held in Tokyo on 5th of December, 2016. JFS is a contest started in 2006 for new varieties to give prizes for exceptional plants all over Japan. Varieties are evaluated by growing performance, easiness to buy for consumers as well as beauty of flower. There are three groups for judgement: cut flower, pot plant and garden plant. Growing tests are done for garden plants at Chiba University. Judges are of academic experts, distributors, retailers, landscapers and designers. 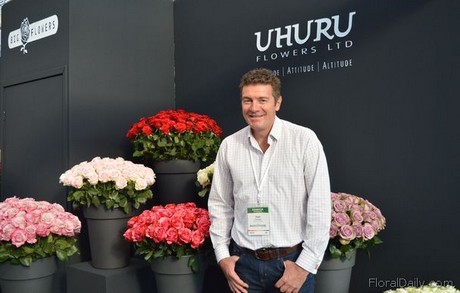 Uhuru Flowers launches Wabara roses
Next year, Kenyan rose farm Uhuru Flowers will put new roses on the market under the name Wabara. This brand, created by the Japanese grower and breeder Rose Farm Keiji, consists of Japanese garden type roses with unusual shapes and scents. "Currently, we are busy bulking them up and we are planning to put the first varieties on the market in February 2017", says Ivan Freeman, owner of Uhuru Flowers. 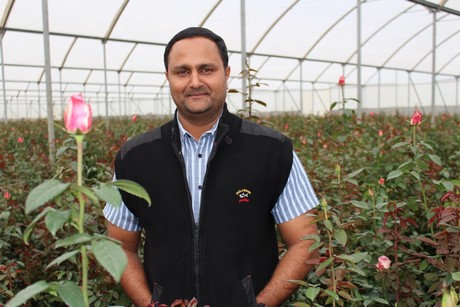 "More competition in red rose varieties"
The auction prices of cut roses have been very low till last December 9, but increased on December 12. "And the reds in particular", says Sachin Appachu, general manager at Bliss Flora. Over the years, this 35 ha Kenyan rose farm, that mainly supplies the Dutch auction, decided to focus less on the typical 'holiday sales' and more on a good year round availability. 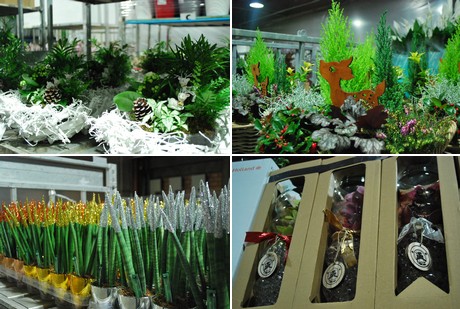 Christmas decks the auction halls
Plants covered in glitters or snow and offered in Christmas themed pots and sleeves. At the Belgian auction Euroveiling, many of these so-called 'added value items' were on offer in December and these could be considered as 'the new kid on the block'. "Compared to last year, not only the number of these items increased, but the range of products too." 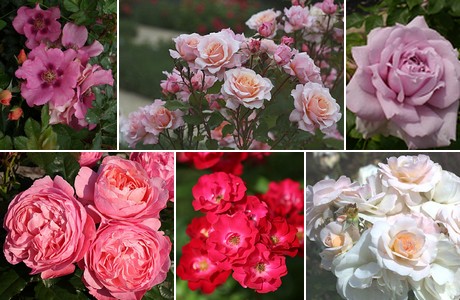 'Kordes' garden roses favoured in many regions of the world'
The winners of the rose trials of the World Federation of Rose Societies were announced in December. In 20 regions spread over 14 countries all over the world, potted and garden rose varieties from different breeders have been trialed. The winners of the awards are listed below. Interesting to notice is the fact that German rose breeder Kordes is mentioned above average and the fact that many winning varieties were bred by the local breeders. 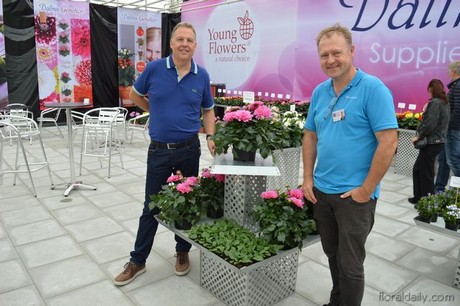 Expanding an existing segment or creating a new?
Enhancing varieties in an existing segment or creating an entire new segment? "Of course, the latter is the ultimate goal of a breeder, but one needs both", says Hans Henrik Kampmann of Dalina Genetics. This Danish breeder created a new segment in the dahlia about 15 years ago and introduced an enhanced osteospermum variety in 2015. "For both varieties, we see the demand increasing, but it took longer for this new dahlia to become known in the market. The adaptation of such a new product in the market often takes longer than when enhancing a variety in an existing segment" 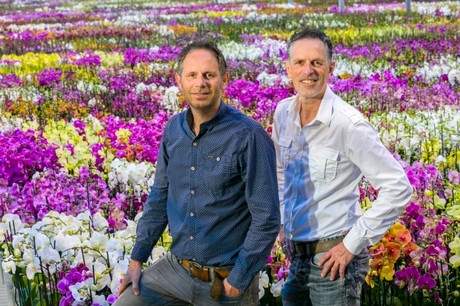 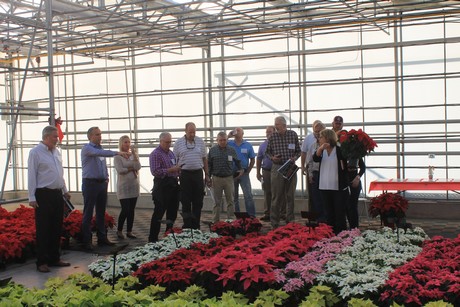 US (IL): Princettia Queen Pink receives highest score at Millstadt's Poinsettia Trial
On November 14, 2017 Millstadt held its 9th annual poinsettia trials. Varieties from five different breeders were showcased to over 300 people who visited this Illinois - based greenhouse. They announced the five best performing varieties in the categories overall, red, white, pink and novelties. 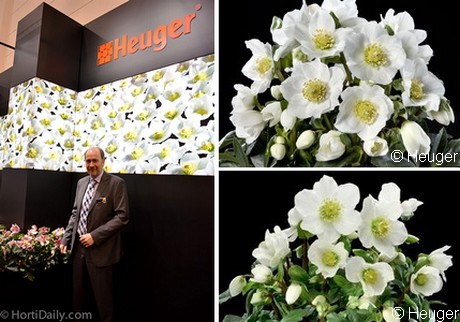 Ball Horticultural Company announces the acquisition of a majority of shares in Danish breeding company Ex-Plant A/S. Ex-Plant will become a part of Ball’s PanAmerican Seed division upon the close of this transaction, which is anticipated in January 2017. Current owner Carsten Leth will retain the remaining shares and will assume the new position of Global Business Manager-Pot Plants for PanAmerican Seed. 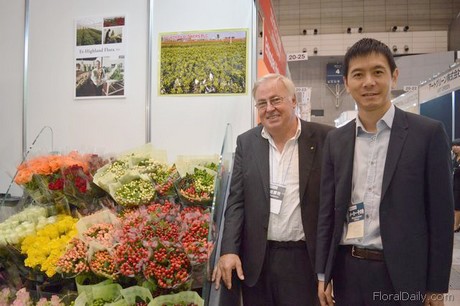 Ethiopia: Early frosts affect hypericum production
Christmas is one of the most important holidays for hypericum growers. The demand is high and the prices increase. This year, however, there was a shortage on the market as many had to deal with a decreased production. The volumes of Frans Diedens of Yalkoneh Flowers, for example, who grows hypericum in Ethiopia were lower than last year. "Due to early frosts the production decreased by 50 percent. In turn, and fortunately, the prices increased."